How to Use a Spiralizer for Zucchini 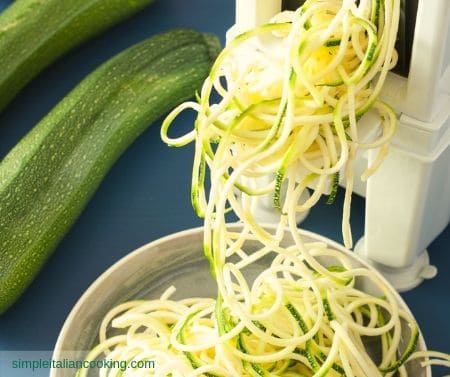 In this post I’m so happy to finally share with you how to use a spiralizer for zucchini both in terms of the spiralizer usage itself, and how to use it for recipes.

Whether your goal for using a spiralizer is because you’re on a keto diet, a vegan or vegetarian diet, raw diet, or just trying to be healthier, spiralizers are a great way to incorporate many vegetables into your diet, and zucchini is top on the list.

Below is a quick animated gif video I did showing what it looks like when spiralizing zucchini.  I’m using my own spiralizer I bought from Amazon and it works great!

I’ll get some more videos up here shortly but this gives a good idea as you read the rest of this article.

Most likely, your interest in using a spiralizer with zucchini is the same as mine… to get healthier.

However, my goal was to learn how to use a spiralizer for recipes with zucchini that could be incorporated into Italian cooking, afterall no one wants to eat bland food no matter how healthy you are trying to be!  😊

So, I’m sharing a recipe below along with some helpful tips for finding the right spiralizer for you.  I hope this article will give you exactly what you are looking for.

How to Use a Spiralizer for Zucchini 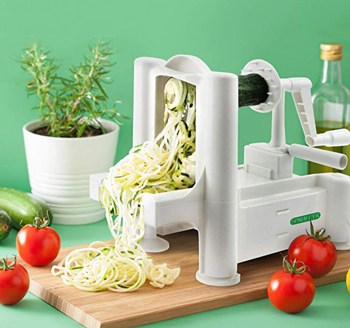 For your standard countertop spiralizer, it’s very simple.  These instructions for how to use a Handheld spiralizer, although I also explain other types further down the page.

In the video above you’ll notice there is a middle pipe, as I call it, which is the center part of zucchini that isn’t spiralized.  It’s the core center of the zucchini.  I’ve seen videos that toss this out, but I never do.

This is fully edible and useful.  Just take it and create very thin slices and add it to the recipe.   Waste not, want not!

THINKING OF GETTING A SPIRALIZER? CHECK OUT REVIEWS OUT ON AMAZON!

What to Create when using a Zucchini Spiralizer?

After you have used the spiralizer for your zucchini, you can use it in a variety of cuisines such as:

Once you have your spiralized zucchini, you can either boil the zoodles, blanch the zoodles, or even eat them raw.

I have a wonderful recipe which you can use which skips the step of blanching or boiling.  One of the issues of cooking with zoodles is they can become very watery and mushy if they are boiled too long. I avoid this with this particular recipe I’ll share below. 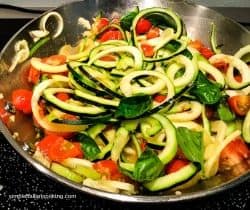 I created this Italian cuisine recipe where instead of boiling the zucchini first, I simply cooked the zoodles along with tomatoes and garlic sauted in olive oil in a saute pan.

Let it cook until you get the desired texture you want.   Before serving, toss in a big handful of fresh basil leaves and let them cook down just a little.

You can get the detailed recipe here.

The zoodles retained more flavor and I had more control over when to remove them before they became mushy.

My only recommendation is to peel the zucchini if the skin is tough so that it is easier to chew.  But that’s a minor issue and not a deal breaker if you don’t.  The recipe is absolutely easy and delicious.

When serving, top with some cheese if your diet allows.

Spiralizers come in various varieties but most commonly used are the white plastic ones like these shown below.  You can get them on Amazon.  There are also the attachment types which I also explain below including my personal experience with the KitchenAid attachment. 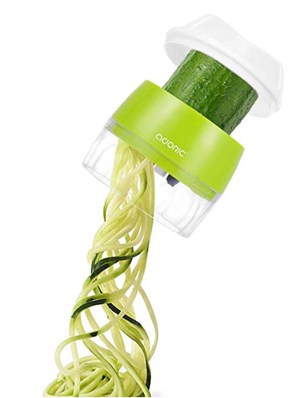 These are spiralizers that sit on your counter.

These are usually inexpensive, and of course the prices vary based on the features included.   If you’d like to know the one I used in the video you can see it here.   I’m very happy with it and the small instructional book is helpful.

The best way for how to use a hand spiralizer is to make sure it has suction cups on the feet so it does not slide around as you turn the hand crank that pushes the zucchini through the blades.

HERE ARE SOME SPIRALIZERS ON AMAZON!

Spiralizers also come in the form of attachments to larger kitchen appliances such as a KitchenAid mixer.   We first tried the KitchenAid attachment and given the price and the stainless steel construction thought that this was the way to go.

For us, we were very disappointed.   It seemed a bit clunky and using for something besides zucchini such as potatoes was difficult because the vegetable has to be at least 3” wide in diameter.  That prevented us from using smaller vegetables.

With our countertop spiralizer this is not an issue.

Using a spiralizer for zucchini is very simple.   Fortunately most spiralizers have multiple blades so you can do more than just create pasta-looking zoodles.    Many come with 5 blades and some come with 7.

The spiralizer I use for my zucchini comes with multiple blades for different purposes.  For typical pasta shaped noodles (zoodles), use the angle hair blade which will most likely be the smallest holes as shown below.

To use the spiralizer to create wider zoodles such as for salads or for a wider pasta noodle substitute, go with the medium blades.

And if you want your spiralizer to create slices, like ribbons, which are great for breading and baking or frying, use the widest blade.

Your spiralizer will come with instructions and more details on how to use the spiralizer for your desired food.

What Vegetables Can I Use with Spiralizer?

Keep in mind, while I’m mostly talking about zucchini, other vegetables can be used.  So the principles for how to use a zucchini spiralizer are pretty much the same regardless with most vegetables.   Other vegetables include carrots, apples, potatoes, onions, sweet potatoes, other summer squash.

Most spiralizers you find online like places such as Amazon will be low-cost and affordable.   There are certainly ranges in price but the one I have only cost $29 and I’ve already enjoyed it for a good hand-full of uses that go beyond the use of zucchini noodles, aka zoodles.

If you like the one I use in my video, you can check it out here. 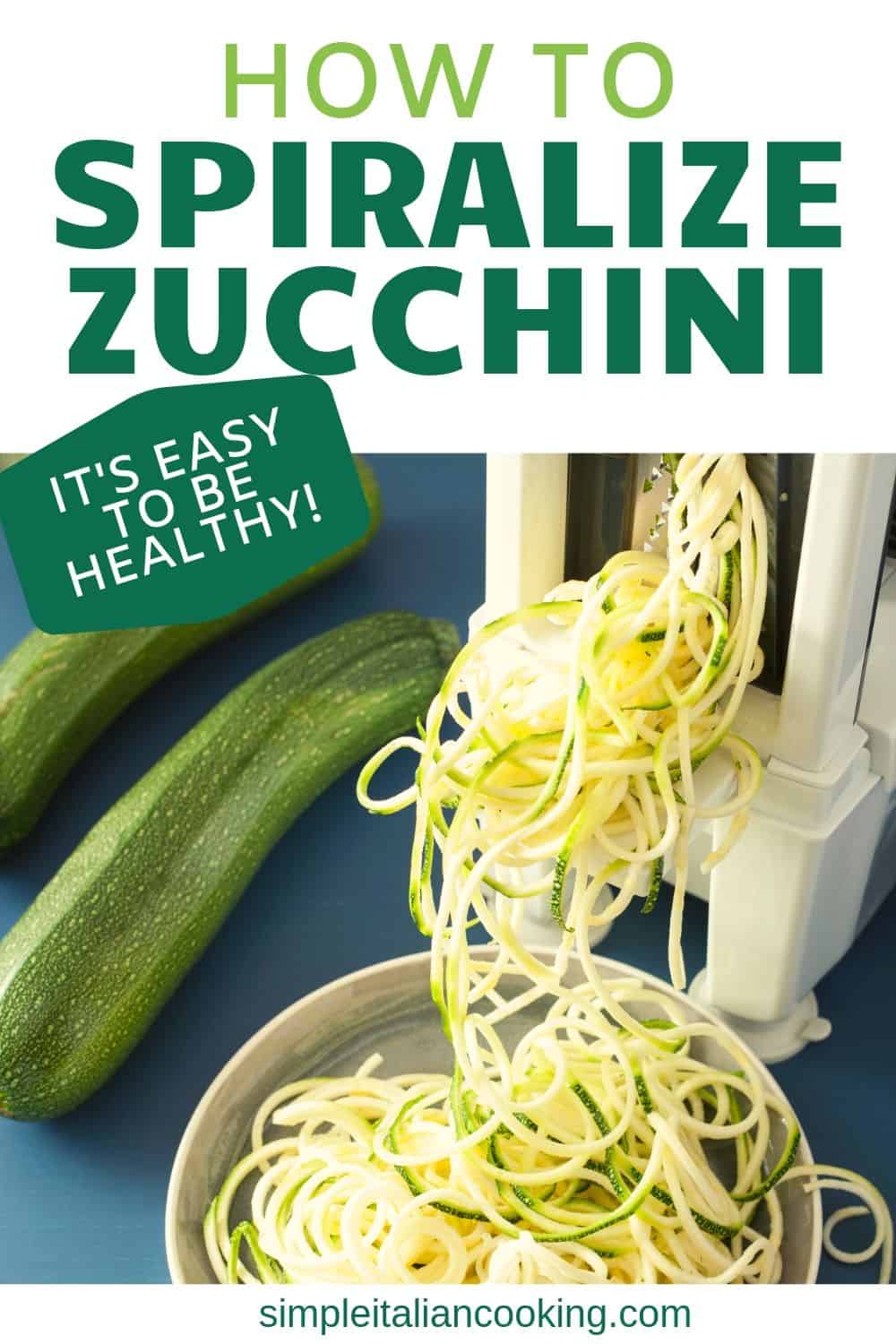 Ciao! Benvenuto to SimpleItalianCooking! I hope you are enjoying my Italian recipes! Want some more delivered to you inbox? Sign up Below! 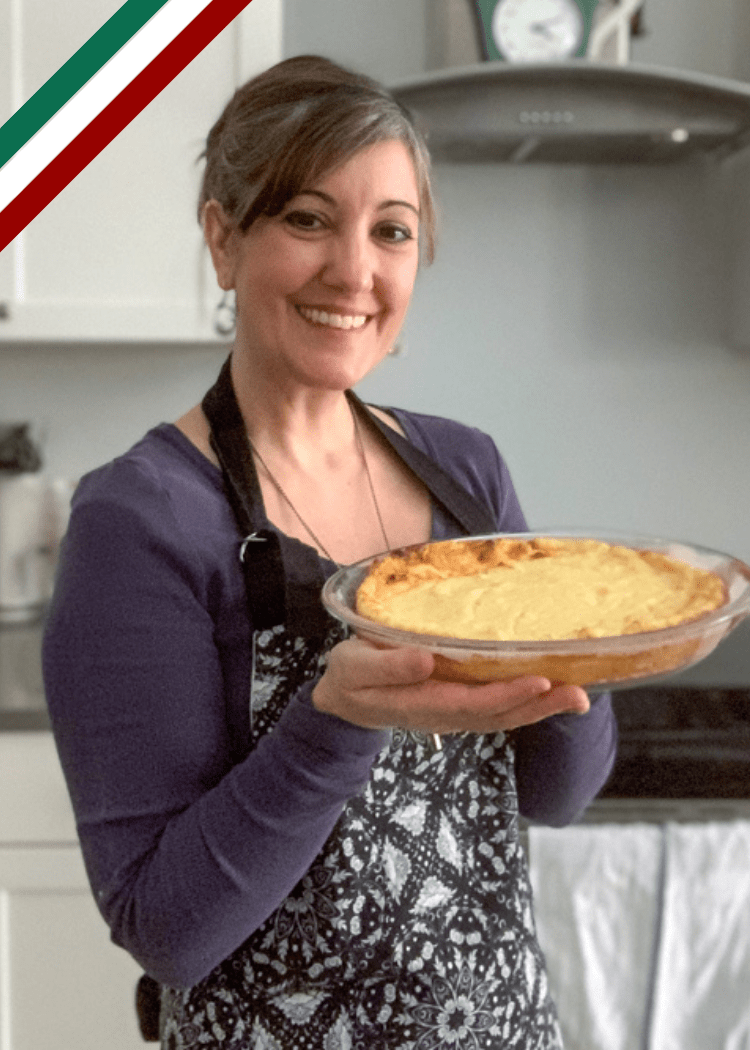